On Tuesday after the Friday that I collected my schedule and booklist, the school bell sounded for the first time since the summer holidays and the boys and girls ran into the school through the schoolyard, which was located at the back of the imposing, almost classical, building. Those who had lessons on the ground floor went directly to that class room, the other boys and girls, carefully separated until halfway up the first floor, then joined together for the last part to this floor and then split up as well to the various classrooms. Now it was traditional at the RHBS that every teacher had his own class room. This resulted, among other things, that at the end of each lesson, the entire student body once again spread all over the building. Apart from the fact that the move was always accompanied by a lot of noise, you arrived time and time again for the next lesson in a room in which there hung a suffocating atmosphere, because the teacher had smoked like a chimney, while the students had been sweating profusely, trying to pass a nasty pop quiz in that same oxygen deprived room.

The classroom of our mathematics teacher, Mr. Smit, however, beat all in this respect. This teacher born in Indonesia, always dressed in an impeccably dark suit with a spotless white shirt, not only was he a chain smoker, but also was very busy during the lecture with a black board eraser. With a stick of white chalk he chalked whole blackboards full and then wiped out all formulas with huge side-to-side movement of his long arm attached to his infamous eraser. The chalk particles that were released thereby also mixed with the before mentioned elements. Mr. Smit hated students who gave the impression of not paying attention to his formulas and then suddenly he could stand next to you with a long ruler and give a firm blow to your school desk; every now and then there will probably have been a few young fingers fallen victim in between? If he did not feel like walking all the way to your school desk for such action, he would sometimes get a kick out throwing the board eraser saturated with chalk residue, with uncanny precision to your head. You were lucky if that eraser did not hit your head, but at least he would have targeted your body and then since you would resemble a chalky snowman; the rest of the student body could easily guess and understand your earlier predicament.
I have always had a relatively good relationship with Mr. Smit, not just because I was always careful with my head and my clothes, but the main reason was that I was interested in exact subjects such as mathematics and physics. You understood that subject matter or you did not understand it. You did not have to memorize all sorts of dumb facts for those subjects, which I found to be too tiring and time-consuming. Nowadays I am interested in very different areas of knowledge, but I still find it very useful that if needed, I can still figure things out by referring back to the logical method of Mathematics!

In school we had a French teacher with a German name and a German teacher with a French name to cause a bit of confusion. The first instructor was called Kalbfleisch; the second one was called Plaisir. I have learned very little from either instructor. The first reason is because foreign languages in general and French in particular, did not really interest me at that time and he was not a very good teacher. The second reason is, Miss Plaisir never was my teacher: we had another German instructor. Still, I think I could have had a lot of fun with her and not only concerning the German language: Miss Plaisir was a young attractive woman, who you could hear from a distance walking on the corridors on her high heeled pumps and as she passed everyone in the hallways, young and old, would attentively admire her feminine beauty. I suppose when you are young, you are prepared to sacrifice a bit of extra time and energy for such a beautiful docent, in other words if she had been my German teacher, I might have spent more time on homework for the Germanic language just to please her I suspect…
However, we had Mr. Wallis for the German course. “Wallis weet allis” (meaning: Wallis knows everything) they always said about him. Because he was very fond of my older brother in the graduation class, he could endure a lot of my shenanigans actually. However, love came exclusively from his side. “Schneiders Wortschatz” was the textbook that threw a monkey wrench in the works. A book full of German spelling and concepts that looked a lot like Dutch but meant something completely different; in short, nothing for me!
The relationship got even worse when our omniscient gentleman once submitted the question to the class – to demonstrate his endless knowledge, he occasionally left the German-language subject. He asked our class: ”Who knows all the stations in the city of Utrecht?”. (I should clarify he meant rail-road stations in my home town) When all the stations at that time, being Utrecht Central, the Buurtstation and the Maliebaanstation were listed, I claimed to know one more and in the immediate vicinity of our school. Wallis stared at me with disbelief and felt quite made the fool, when I reported: “The “Shell Station”, here around the corner of the street, Mr. Wallis.”

Somewhere at the top of the building was “an old geezer” still roaming around, who was teaching Geography and actually should have already retired eons ago. This veteran instructor was called De Looff. This man’s teaching technique really came from the Stone Age. He was, for example, firmly convinced that if you repeated things again and again, they would eventually sink into the brain of these dense students. If a certain country or part of the world was discussed, you had to color- color-coded charts of those areas with coloring pencils to indicate what grew and thrived there. When he talked about Alaska, he invariably spoke the name of that state as “Aljaska” – it is quite possible that he visited that state at some time in his life.
My more serious older brother, Theo, was sent home the day before his final exams because, while De Looff was distributing test papers for an end exam, he shuffled directly behind the old man and collected those same exam-sheets up again! In a separate room in the school building there was a large collection of stuffed, often exotic, animals. Because De Looff was so devoted to his school, I seriously suspect him that he would have been eager to be stuffed after his death to eventually become the magnificent center point of this gruesome taxidermy collection. 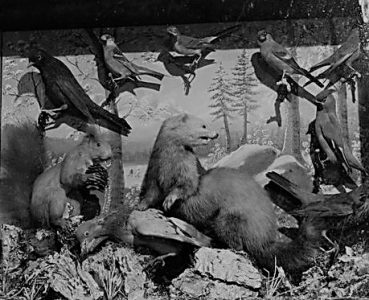