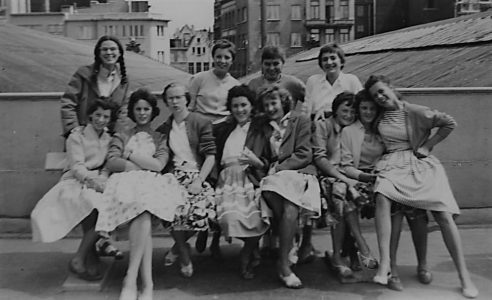 My Grandpa Heijgen, the father of my mother, actually was a wonderful source of clothing items during that time. He bought second hand clothes almost every week and had access to a multitude of clothes and other items left on the train on the railway market. I was there every Saturday morning early before the crack of dawn even, to sort through new clothes items he had found. Usually I was able to recycle a lot of the stuff he managed to get a hold of.
I think that my dress-up passion came from the loft of my childhood friend Joop de Bode. In the attic of the de Bode family in Lodewijk Napoleonplantsoen, we rehearsed plays for school performances at a young age. Here we eagerly dressed up in all sort of garments stored in the attic in suitcases and we even tried on the old clothes from the lady of the house. As a boy I recall, it was quite an exciting perhaps even titillating experience to put a piece of slinky women’s clothing around one’s body.
Perhaps my daughter Florence has also inherited some over some of my former dress-up habits. In her youth she regularly dressed as “Lawrence of Arabia” and made the neighbourhood unsafe in that getup, all that was missing from this desert mirage was a camel perhaps!?!
If my parents had already spent money on clothes at home, which was very rare, then this money was mainly spent on clothes for my eldest brother Theo. He will, however, still contradict this, claiming in “the fact” that I was mother’s favourite. Anyway, as a student, Theo was the biggest source of income for my parents in terms of child benefit, and that was difficult for us to compete with really.
If my younger brother Charles and I desired something new, for example, in for a “Beatle jacket”, then at best a few yards of black corduroy were bought on the cloth market and father in good spirits pulled up a chair behind the family Sewing machine. Unfortunately, that approach rarely promised a good outcome!
The sweet man always did his utmost best to make something presentable. He sat for days in his scarce free time behind that old “Singer with foot pedals and would kick them like a madman to keep the machine sewing at great speed. You could almost hear the neighbours on such days think aloud, that the Plomp family was enthusiastically busy sewing. *(I should add that the word naaien=sewing in Dutch, but this word “naaien” also has another and more erotic meaning. I have decided to discretely leave the other meaning to the reader’s imagination over though) The booming rhythmic noise of the staircase sewing machine was quite audible and could be felt practically at every corner of the block of apartments it resulted in a sort earth tremor which measured at least 6.8 on the Richter scale. To be honest, I have to admit that producing such a “Beatle jacket”, also known, as a Nehru jacket in USA named after the first President of India, however simple it is, was a big challenge for a well-meaning amateur tailor wannabe like my dad. The jacket that eventually rolled out onto the production line of the machine could easily withstand the test of criticism though. The garment had a round neck without collar and had no lapels, so yes, typically a “Beatle jacket”!
It was a bit different with the trousers however that he once manufactured at my request. After the success of the jacket, I thought: now Pa can make me a pair of bell-bottom trousers from the same fabric to match.
Apparently, it is not all that easy to sew a decent-looking fly in a pair of trousers however. My father was admittedly a creditable insurance agent at that time, but he was certainly far from a professional tailor. As I mentioned before, the good man was amateurish at best!
The trousers that he produced and with which I would be stuck wearing had two eye-catching details. To begin with, the fold in the slightly flared trouser legs were sewn in such a manner that they unintentionally gave the impression to spectators of the opposite sex that I walked now provocatively wide-legged. Then there was the all-important fly to content with also. This fly was rather heavily stitched on the crotch, and protruded so far outwards, that even at a great distance the false impression was given, that there was a gigantic “stiffy” hiding behind my bulging fly. Especially the latter was for me, an adolescent of barely fourteen years of age, this created a rather disturbing image to say the least. I felt if I walked if these new trousers I would resemble a ballet dancer perhaps? I am sure you are familiar with the vision of a young man dancing on their tippy toes while they strut their stuff in revealing tights on stage leaving absolutely nothing to the audience’s imagination over. Stuffing the “family jewels” in those flimsy tights seems to be a somewhat impossible as well as well a rather uncomfortable option to say the least. I never did like the sight of this, which may well be the main reason I never attend any ballet performance.
Getting back to my new trousers however, since there were no other pants available, I quickly decided that it might still be better to wear these unique but crazy pants, than wear no pants at all; with the embarrassing result that everywhere I went in my new “glad rags”, young beautiful girls with dreamy eyes would be staring shameless at my deceptively ample corduroy crotch!

For all parts click: Beatle jackets and bell bottom trousers 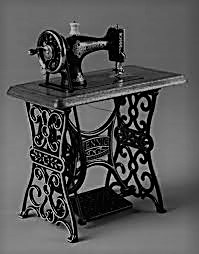