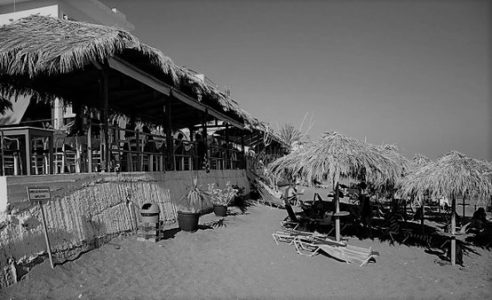 Ah, Crete and the delicious sweet intoxicant scent of pine trees spread over the mountains. However, each year at the end of my vacation on this beautiful island, I long for home, for the cool climate at the coast of Dingle at the Atlantic Ocean. Having stayed for two weeks in temperatures of about 35 degrees C., I really have had enough of this tropical heat and it is my firm intention to stay a shorter period the next time I go to Crete. But when the winter has passed and the summer weather in Ireland doesn’t promise summer temperatures at all, those memories of the scents of pine trees and having dinner on a terrace of one of the characteristic taverns at Crete’s coast, get the better of me. As always, I hurry to book a journey to this wonderful Greek island. I have been traveling to Crete with Transavia for 30 years now. After Ireland, it really is my favorite place, regardless the busy hotel areas, loaded with individuals that only come for the sun and orgies, Crete has a lot more to offer. Especially the inland, the mountain areas and the southern coast are worthwhile going to. Here one can find the traditional atmosphere of the taverns where the original Crete music is played. In fact, a long time ago it has been the very popular British series ‘Who pays the ferryman’ that tempted me to travel to Crete.

Mid-September, two years ago, I went again with Transavia. I fly from Cork to Schiphol Amsterdam in the evening and transfer to Crete the next morning. Because of the early flight schedule, I always stay at Schiphol in one of those so-called ‘shoe boxes’ owned by Yotel and located just behind the customs area. The name Yotel makes you fantasize and indeed, you may rent such a tiny room for a couple of hours during the day as well as during the night. I have been told by insiders that the bed in such a room not always served to sleep comfortably and start traveling well rested. A certain group of professionals in this specific ‘industry’ do very good business, so I understand.

For this journey I had reserved approximately 100 copies of my recently published book ‘When I was young’. By way of promotion I had planned to hand these to my fellow passengers at the gate at Schiphol Airport. On the evening before my departure, the partner of my sweet sister-in-law assisted me voluntary. It was of eminent importance that I got rid of most of the copies as I was travelling with hand luggage only, which implies that you are not allowed to carry a travel bag into the plane that weighs more than 10 kilo’s. The evening before, I had already handed out about 70 signed copies and consequently I had still 30 copies left that early morning, just before departure. The average Dutchman is always somewhat suspicious when he is offered something for free and that exactly happened this morning. At the gate, the first books were accepted like hot cakes but later approaching another row of passengers, the first person even bluntly refused to accept the book. From the faces of the following passengers, that had noticed this abrupt refusal, you could see that they were going to react likewise as if they were offered an indecent proposal. And thus, at the end, I got stuck with 5 copies. Once seated in the plane, my ego was boasted seeing that here and there passengers were leafing through my book and were laughing while reading.

Around 11 am the plane lands in Heraklion and with hand luggage only I can pick up the pre-reserved rental car without any delay. As soon as I sit behind the wheel on my way to Mirtos at the south-east coast of Crete, I always look for a small side road where I can change into my summer outfit that I will wear the coming weeks, consisting of shorts with a T-shirt and bare feet in sport shoes. For me that is the time that my vacation starts and even more when I stop at a place where I have my first Greek salad, an oven fresh baguette as well as a bottle of Retsina on the table in front of me and with the sound of the traditional Greek music in the background. For those who don’t know what Retsina is, it is a white wine with a strong resin taste and is mainly drunk by the real enthusiastic drinkers while being in Greece.

Once arrived at my destination around 3 in the afternoon, it means unpacking quickly and getting settled in my temporary shelter with a view on the Libyan Sea. When that is done, I speed to my favorite tavern owned by Ioannis Sklavakis. It is situated right at the beach and the inviting cool sea. First thing I do is take off my shoes, hang my tired legs over the balustrade of the terrace that lies in the shadows created by the blue linen tent roofs. Then I have my first view on the small beach below and drink my first Mythos beer, the one and only and preferably pulled into an ice-cold glass.

I know Ioannis Sklavakis as long as I have stayed in Mirtos. He is a proud and sort of timid Cretenzer. But once he has formed an opinion, you cannot possibly change his mind. He always welcomes me with ‘Mister Albert’ and shortly he adds ‘Einstein’ for totally unknown reasons. I always think, okay, let it be, you could have to live with less. Mind you, it might have to do with my haircut.

On his terrace you will find about 10 characteristic blue tables with matching chairs. Each table covered with a spotless white cloth and on it a vase filled with fresh flowers. In comparison with other terraces, the one Ioannis owns distinguishes itself because of the sandstone objects that are spread all over the place. He claims that it is art. Such an object however, is just a stack of sand-coloured, flat and round stones that he, after having drilled a hole in the center of the stone, has lowered them over a piece of reinforcing metal. As said, my Greek friend considers it art. Because I have seen far more expensive expressions of art of which for the eye much less to nothing creativity and energy was used, I have never had a discussion about his art with him. In addition, he is very convinced that his work is unique, reason why he has placed signs all over the place telling visitors in the English language that it is absolutely forbidden to make photos of the pieces of art. Almost daily around 5 pm I sit at my favorite table and I often witnessed that nevertheless a passing innocent tourist made a photo of such a stack of stones, probably under the impression that the owner of the establishment could not possibly refer to the stones with those signs. I would look at the door of the tavern out of which I expected a provoked Ioannis running out to give the tourist a fierce reprimand. I often noticed that the visitor, totally surprised and speechless, would slink off with his tail between his legs. Time after time I tried to convince my friend that this was not quite the way to count on the person’s return to drink a beverage or eat a meal at his place. But as said before, Ioannis will never change his opinion once he has made up his mind. My friend isn’t that timid.

Since years he maintains the same limited menu and he does not intend to adapt the card. The only thing that changes each year are the prices, which I of course don’t like at all. Because the card is plasticized and the space next to the listing of the drinks and spices, is left open, each year our manager fills that space in with an increased price. Regularly I saw people expectantly visit his place and after having examined his card, left the terrace again, disappointed because his card only shows about six dishes of which two are a plate of spaghetti with tomato sauce and a pizza. However, there are people like me that remain seated and order a meal. Because Ioannis is preparing the dishes himself it might take quite some time before something edible appears on your table. Being a steady customer, it doesn’t take that long for me and I know by now what can be expected. During the weekends he is assisted by two most beautiful nieces that both study at the university in Athens. I know these girls from the time they were infants and because of the fact it is impossible to describe in a few words into what beauty’s they have grown, I have dropped any attempt to do so.

With a glass of Retsina in my hand, it is so amusing to study the guests having a healthy appetite and see them become very restless, in panic even with an increasing disbelief stare at the kitchen door out of which their delicious dish should be brought to their table. The kitchen lies a little higher and can only be reached by a small stair and thus from the terrace it is impossible to see what is going on in there. It is awful not knowing if it will last another 5 minutes or perhaps even an hour before you have your food on the table. I have experienced that quests had to wait more than an hour and if that wasn’t enough, another half an hour before the bill was finally presented. Because I have a sort of an account, I usually call down at the kitchen stairs, “kali nichta” and without paying I return to my apartment. 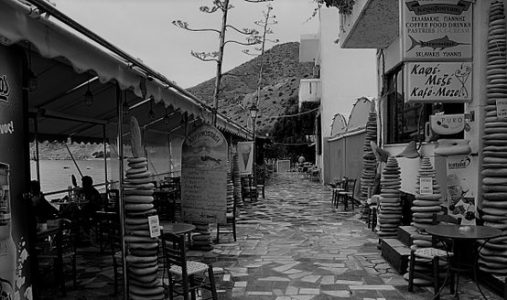