Sharing a room with a younger brother, wasn’t so bad after all. I think we lived on the third floor of this apartment block until 1961, thus up to my 13th year. As the years went by, our room changed into a sort of disco. We arranged a large black fishing net from wall to wall and installed strings of coloured lights. The music the three of us listened to was broadcasted by Radio Luxembourg, a very popular station in those days. The radio we had was a large and old device that had survived the bombing during World War II and had in front a large number of white keys, like on a piano. For a few guilders we had bought it during a rummage sale on the ‘Paardenveld’. Each night we fought about what music we wanted to hear and preferably as loud as possible so that it echoed through the apartment building.
Before we had this radio, we used a so-called crystal receiver, a small device that without the use of energy could receive broadcasting stations. The sound could only be heard with the aid of ear plugs. By carefully moving the antenna back and forth we could receive various stations. We were successful in setting up a sort of network. With a friend, Tonnie Ultee, also a member of our soccer club SHUNU and being a neighbour, we had made a connection by tightening a special wire over the total length of the 3rd floor of the building. This way we could exchange our favourite music. We even had been successful in making a connection with another SHUNU member, Joop de Bode. That connection was much more complicated because Joop lived in a single-family house on the opposite of the street. So, we tightened wire from our floor to his house over the street where daily traffic passed by. Amazing, as you cannot possibly imagine doing this nowadays.
At street level of the first apartment block you found all sorts of shops stretched out over the total length of the building. The first shop was aunt Greetje’s drug store. Aniseed and all sorts liquorices spread a delicious odour in her shop. During the winter it was strongly mixed with the smell of a smothering oil heater. Visiting her shop regularly was kind of interesting because aunt Greetje had a nice girl of about 20 years helping her. In winter this beauty would often wear tight fitting black leggings and just a white apron. When visiting this shop, we always stayed much longer than necessary, and we loved to ask the girl for some candy from a certain jar for which she had to get the small ladder to be able to reach it to fill a paper bag with some of the goodies. Meanwhile we were waiting patiently under the ladder, sharply watching her movements.
Next to the drug store you found the cigar shop Van den Akker. Here we bought per piece a variation of cigarettes. We just got whatever we could smoke but particularly the Egyptian ones as those were extra-long. They spread an awful smell of burnt socks made of goatshair. In addition, we could buy our music magazines, like Music Express. This magazine gave us all information about our favourite bands but most important was that it also contained beautiful posters of The Stones, The Beatles, The Kinks, the Animals and of many other well-known bands. Those posters found their way to our walls, the ceilings and the doors of our bedrooms.
Next to Van den Akker was the grocery store ‘Van de Rijst’ and adjacent to this store was ‘Van Maurik’s dairy shop’, our milkman. This milkman often asked for Theo’s assistance and my brother had to work very hard for just a few coins going up and down the stairs with for example glass bottles containing milk and ready to serve porridges.
The next two shops were owned by Marja, selling all kinds of needle and sewing articles as well as fabrics for draperies and cloths. Next to her you could find ‘Stroes’ green grocery. We just loved to help him by getting rid of his supply of strawberries, cherries and apples. With sticky fingers we observed him while he was onloading his supply of vegetables and fruit that he had bought at the auction early in the morning. As soon as the poor man rushed inside into his store with a heavy box, he was always in a hurry as he most certainly suspected what could happen behind his back, we would strike pitiless and grasp what we could get and tried to eat it before he returned, ready for the next attack. 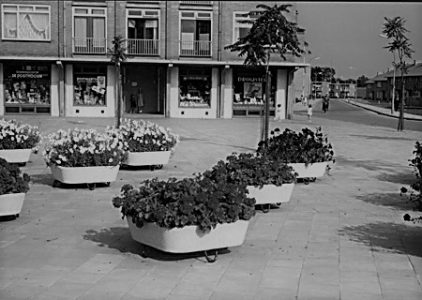