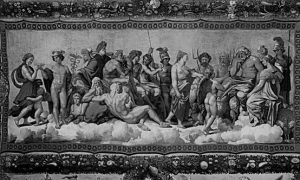 Ioannis’ parents have always been very involved with their sons’ work. It is so sad that his very nice mother died a couple of years ago. She would instantly spot when new customers had seated on the terrace and she would with a shrill voice yell “Ioannis”, and he would appear rapidly to take the orders. She had been suffering from Parkinson for a number of years, reason why she could hardly get out of her chair. She moved with a walking aid and was depending on day and night assistance from an Albanese woman, also when she was sitting on her son’s terrace. One day, in my presence, she insisted to be helped down to the beach probably to swim in her beloved sea for the last time. When she returned I applauded and she radiated.

Ioannis’ father was one of those old-fashioned fisherman, a real seadof, until this ‘horrible illness’ struck him and in no time, he shrank from a sturdy individual to a small and very vulnerable man. Since his wife died, he is now the one that is constantly assisted by the Albanese woman. In his good days he would be at sea fishing and bring a variety of fish to his son’s restaurant. Fish is not my favourite dish, but it was never a problem for Ioannis. I could order whatever I liked and when it was not available, his father was asked to go and get his motorbike and buy what was wanted elsewhere, for example a juicy steak at a butcher near Ierapetra.

Although last year I had the feeling that the old Sklavakis would not live very long, I realized this time that he was rather active. Especially his more than special interest in females struck me. Many times, I had noticed that for whatever help he needed, he would not only reach for the hand of his Albanese companion. However, one day, while I was as usual reading my book on the terrace, from the corner of my eye I all of a sudden saw that the sick old man, while seated in his wheel chair, was dangerously bowing forward. Much too far in fact and it worried me. It was obvious that he would soon tumble forward. I thought that he was perhaps having cramps in his abdomen caused by the heavy medication he had to take. When I was about to warn his son, I noticed the true cause of his alarming pose. The old man showed an extreme interest for two Greek goddesses – a blond and a dark-haired version, both with an almost nauseating beautiful figure. They were on the beach moving around in all kinds of imaginary positions. The blond girl lied flat on her belly and her well-formed butts seemed to be nude as there wasn’t any piece of textile noticeable. I have to admit that it was sort of difficult to neglect this scenery and I fully understood that the old man did not want to miss anything of what was shown down there and was therefore taking the risk falling over the balustrade and perhaps end lying with his large nose between those beautiful butts of this gorgeous goddess. I concentrated again on my book and ordered another one of those ice-cold Mythos beers.

It is so exciting to sit down at a table of one of those taverns at the Mirtos beach after sunset. The beach is small, and you sit almost directly at the waterfront. The light sea breeze after a blistering provides a pleasant coolness. Alongside the beach you will find a narrow boulevard with approximately ten inviting taverns. When you are at the end you cannot see the other end. Thank God you won’t find a long row of bars with large SKY-TV screens with groups of half or blind drunk noisy soccer hooligans in front of it. There is just one bar that has such a screen and it is only used when it is getting dark and when for the Greek people an interesting match is shown. But what else then is there to be seen on Crete?

As soon as the evening falls, the taverns light the oil lamps and wax lights on their terraces. The boulevard remains semi dark. The sunburnt young girls walk hand in hand wearing spotless white dresses and the boys on their bikes speed by the tables without being a burden or making a lot of noise. Everything happens in a totally serene atmosphere. Even the many cats and dogs don’t misbehave and patiently wait at your feet until you are willing to share some of your meal.

For some it is the topic of the evening when in tavern Flisvos at 8 sharp ’the lady of the house’, after a day of hard labour in her hot kitchen, calls it a day and in bikini lowers the stairs to the terrace and via another stair walks towards the beach, in her wake followed by her large sheepdog. Almost each night when the dog gets to the beach he lifts his leg and sprays his urine over the sun beds that are awaiting next days’ sun lovers. Although the sun always is most inviting, I am rather reluctant to lie down on one of those beds.

After the lady in question, a robust woman of about 35 years and having Baltic roots judging the way she speaks English, is done with her swimming, she returns armpit fresh towards the kitchen but not before she has showered extensively and topless, using a shower that is attached to the brick wall close to the tables of tavern Flisvos.

Over the past few years, many things have changed in Mirtos but not in a negative sense. There are more bars and taverns implying that there is much more choice for people wanting to dine. There used to be only 2 or 3 establishments and when you wanted to have a decent breakfast, for example fried eggs with bacon and a good cup of coffee, you had to drive about half an hour to Ierapetra. In Mirtos you could get a cup of tea with a piece of brown bread with which you could smash someone’s skull to pieces.

From those days there still is an old-fashioned hairdresser for men, which then looked more like an abattoir. I still remember that one of my friends I had, was in danger losing his carefully cultivated beard having shaved off because he thought I had an affair with his girlfriend. With that action he merely wanted to proof something, and I accompanied him enthusiastically. When almost there seeing the shop, he decided against the ’treatment’ after all. 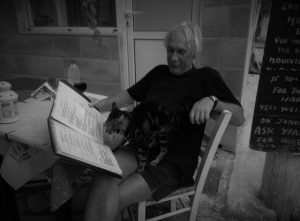