From the time that we lived in the Salvation Army home, I must have been around three or four years old, I can still remember that there was a large room where toys were stored, meant for poor children. The quantity and diversity of these toys was immense. Once in a while I dared to get into that room and I could in admiration gape at all these wonderful gimmicks that were ready to hand to other children.
Another memory I have from that period are the ‘Army’ festivities during Christmas. My parents organized this yearly at the headquarters for the poor children from the center of the city of Utrecht. In the main room tables were placed in a large circle and they were decorated with small Christmas ornaments and many lighted candles and often a big Christmas tree was placed in the middle of that circle with lighted candles as well. My mother would serve hot chocolate milk, like our Queen Juliana always did, and she handed slices of currant-bread to the gathered children. After singing some carols, my father would operate the film projector and show on a huge screen a movie of Rintintin, the adventures of a famous Scottish collie.
Another wonderful memory I have from those days is the day trip to the beach in Petten, a small city in the province North Holland. I recall this as if it happened yesterday. The tiring walk on bare feet through the hot sand and then tumbling from the dunes and run to the cool sea water. The wide sea, the large waves and the smell of sea air made an unerasable impression on me. It isn’t so strange that right now in Ireland I am so very happy living close to the ocean. Perhaps it is for this reason, my love for the sea, that my parents sent me for several summers to an awful holiday camp in Egmond located in Holland at the North Sea.
My parents left the Salvation Army rather abruptly, most probably because of an argument with the corps management. Quite suddenly we were homeless and even without the daily newspaper. We lived for a summer and the greater part of that autumn in a tent on a camping, awaiting a new home in Utrecht, an apartment in a newly-built post-war district called “Lodewijk Napoleon Park”. Living on the camping goes back to around 1950, a time that the camping just started. For us boys, it was a wonderful time, all of us in a tent that was set up on a still existing and natural sand-drift.
At the end of that year I went to a nursery school in the neighbourhood of the camping. During that time, we were taught to write on a slate with a carbon pencil and we used a small sponge to clean the slate afterwards.
It must have been during the winter of 1953 when we moved from the tent to the 3rd floor of the newly-built apartment block. I shared a room of about 6 square metres with my brother Charles and slept in a bunk bed as there was absolutely no room for 2 beds. We lived there during the time I went to grammar school. After the birth of my sister, Saskia in 1956, we were with six persons in this small 4-room flat, consisting of a living room of around 20 square metres, a combined dining-bedroom of approximately 16 square metres, where my parents and later with Saskia, slept. The poor girl must have been almost six years old when she was still sleeping in this room with my parents. 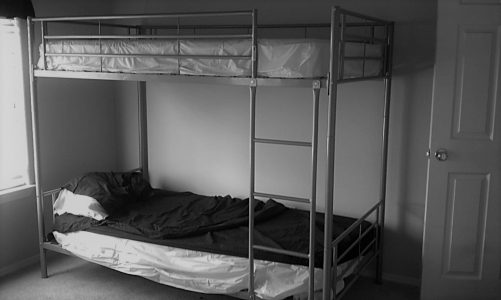