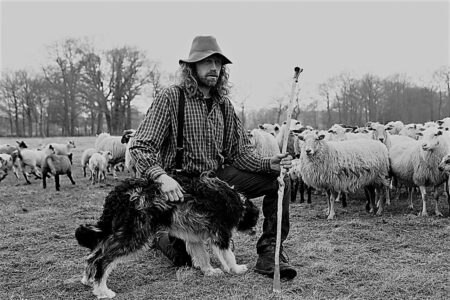 Summer and winter, from early morning to sunset, you could usually find me playing outside in the streets. With perhaps a short break for food and attending class of course.
I would not mind playing inside but there really was not much room for kid’s play in our tiny apartment. Besides since all my friends were horsing around outside anyway, staying inside would have been rather boring since you were forced to amuse yourself all by your lonesome.
When once in a blue moon I actually had the rare opportunity to play inside, I usually was usually quickly kicked outside any way, for my parents preferred peace and quiet and that meant no children under foot.
To play inside with some friends, you really needed lots of space. So, you could make a proper mess to your heart’s content.
But in my neighbourhood, only a few houses were spacious enough inside to handle rambunctious child play. If you actually were lucky enough to be invited inside by a buddy, it usually meant that, under the watchful eye of the lady of the house, you would be restricted to play a few truly lame and boring games on the floor of the living room. Games like ‘Magnetic fishing’, ‘Tiddly Winks’ or ‘Sorry’ for example.

Another good reason for indoor play was getting our entries ready for the annual science fair at school. You would work together with a couple of classmates to construct your original showpiece of master carpentry for the fair. My friend Joop and I worked extremely hard together to create our own generic version of an airplane and a ship as I recall.
What we enjoyed more than anything, however, was to practice together for our annual Christmas play, near the end of the year’s Holiday season when we all still attended primary School. Our public school encouraged each class to submit an original play and perform it right before Christmas vacation in our Gymnasium.
To practice for this special event, we really needed a house with lots of space. Joop’s parents lived in an attractive little bungalow: a totally self-contained home that was supposed to accommodate an average family.
Joop’s father was a schoolteacher and his mother was a member of an amateur theatre group. Both would encourage us to develop our creativity to its fullest extend and happily welcomed us into their home for these occasions.
We had total use of the entire attic of the house. Us kids were free to let our boyish imagination go wild. We could totally rearrange this upper floor to our needs and make use of all the stuff and clothing stored there as we saw fit.
The plays we wrote, were truly ingenious masterpieces. We directed them ourselves.
As a rule, the practice sessions ended in a gigantic free for all mess. The clothes of Joop’s parents strewn all over the place, including silky sensuous undies and nighties of the lady of the house.
Joop’s mother however, was an incredibly sweet lady as well as a truly good sport. She managed to keep a smile on her face while we must have tried her patience many times over. Still, she always allowed us young budding actors to use her house for these ingenious as well as chaotic stage performances we produced

One time I felt the strong religious calling to produce an original Biblical play all by myself. Inspired by my God-fearing father perhaps, who was a well-respected deacon in the Dutch Reformed Church in our neighbourhood.
Motivated no doubt by his endless Biblical sermons, which he had poured over my young impressionable head for years, I planned on directing the play ‘The Lord is My Shepherd’.
The timing of the performance was perfect. It would take place during Christmas celebration. I thought it was most appropriate to come up with this play at that time and it was sure to become an ‘off-Broadway showstopper’. This drama would not only be brilliant for its simplicity, but it would also give the practically ‘heathen children’ of our public school some true Christian faith. Let’s just face it. In my school there was truly little time spent on Christian values or attention to the Lord’s work.
This play had to be short and powerful. So, to be assured the play would set the perfect tone, I had assigned myself the lead role of Jesus.
The idea for this drama had occurred to me, because I had discovered a large blue tarpaulin as well as a big old trunk in Joop’s attic. I had also found an old, long, green jacket which would be my robe and a large stick for my staff. With those stage props at my disposal, the thought of Matthew 8:23-27 came to mind. The image of Jesus, who wandered calmly across the sea of Galilee, while his loyal disciples, seated in a small fishing boat, followed his steps anxiously.
That huge tarpaulin would nicely represent a water surface and the old footlocker, a boat of course.
I figured that on every corner of the tarpaulin, one of the actors would have to take a seat to move the sail up and down. This would create the image of huge waves. At the same time, these followers of Christ would have to blow the crap out of their lungs, to simulate stormy weather at sea.
Furthermore, I thought that most of the crew could all be seated. We would try to cram as many as possible in the bottom of the trunk. Thus representing Jesus’ disciples. Those who no longer fit in the boat had to stand at the edges of the tarpaulin and help blow and move the sail up and down with all their might.
Then I would appear on stage. Impersonating the good Shepherd, as I walked over the surface of the Sea of Galilee, calm and fearless.
It also was my idea to have my followers seated in the trunk singing then psalm 23: ‘The Lord is my Shepherd’.
Under the chant, I would purposefully head for the boat and call to the fearful disciples: “Calm down, it’s me, you don’t have to be afraid”.
Immediately after the pronunciation of these healing words by our Lord and Saviour, the curtain should drop.
During the final performance, on the way to the boat, I toyed with the idea to treat my audience, including my theatre company, to a light hearted version. By reciting a part of an old song: “Don’t be afraid of the dark, you’ll never walk alone”. Thank God I changed my mind about that decision. For it seemed not a good idea to draw the wrath of the Lord on my head by mocking him publicly right around his birthday.
However, when I said: “It’s me, you don’t have to be afraid” to my loyal followers, for the first time in my life I experienced an erection. I was only twelve years old at that time. Lucky for me there was lots of room for that under my wide tunic. But just when I was telling my disciples to not be afraid, I was rudely interrupted in my speech by ear shattering deadly putrid farts, shooting across the Sea of Galilee. These salvos of floating flatulence came from the direction of the wind-makers. Apparently, the outside air pressing on this group of blowhards had played a part. Air of inferior quality had found another escape route by means of loud smelly bottom burps. The atmosphere was tainted, both in terms of ambiance as well as a vile malodorous stench.
The tense atmosphere of the audience, where a minute ago you could hear a pin drop in the Gymnasium, had turned immediately into a deafening response. The audience practically fell out of their chairs, howling and crying with laughter. I didn’t know how soon I had to disappear behind the curtains. This loud laughter deflated my erection immediately.
Then the thunderous applause became even louder, and my stage name was chanted over and over again.
When I finally dared to get back onto the stage again, I was honoured with a standing ovation. At this point my crotch chose to rise to attention once more.
What should have been the performance of a sensitive religious drama turned into a rather unintended wild slap stick comedy instead. A combination of the fabulous Three Stooges and the wild disorganization of Hollywood’s Keystone cops.

Years later, when my brother Charles and I had grown and practically towered over our parent’s heads, mom and dad still sometimes sang very devoutly ‘The Lord is my Shepherd’. Immediately after they started their favourite psalm and sang “He leadeth my soul where still waters flow…”, then Charles and I broke into the song with our add on: “And your poor little children could use some more dough”. 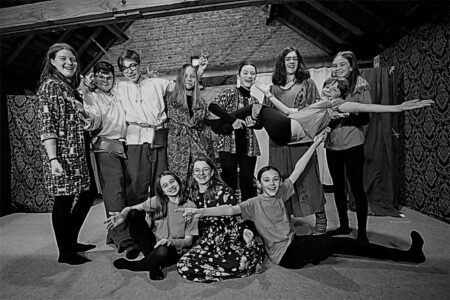