While listening to a song called “The universal soldier” by Donovan, my thoughts trail back to the sixties when my younger brother Charles and I still shared a bedroom together downstairs.

This bedroom was located in the back of our 6-room apartment house in the Louis Bonaparte Park in the city of Utrecht. This part of town was built in such a fashion, that the front of the house in these big housing developments had a living room area, overlooking parking areas and the main road and the bedrooms were located in the back of the house.

The bedrooms usually looked out on a communal back yard with a sort playground and sandbox where the little kids could safely play. As our bedroom faced the bedrooms from the other flats across from us, we did get the opportunity sometimes to really sneak a peek at some pretty girls living across from us in their sleeping quarters. Possibly it was due to the forgetfulness of the weaker sex living across from us to not close their curtains or perhaps not close them tightly enough by either accident or perhaps a bit on purpose? As you can imagine, when we saw the enticing contours of young women projected on these curtain-shades our imagination would go wild and our teenage hormones would go into serious overdrive!

Our room also had a door to go outside, which really was a great benefit to us as we more or less could come and go as we pleased because of this useful feature. For example, in the summertime as these apartments were not air-conditioned and the night temperatures were still too warm to sleep comfortably in the evening, we would leave that door open during the night. During these hot summer nights, we witnessed ever so often some even hotter necking parties taking place in either in the children’s sandbox or in the grass.

Once in a while during the summertime we actually dealt with paedophiles trying to mess with innocent little kids who were playing in the sandbox and we really fixed these lousy good for nothings appropriately, so they would never return here.

Our room hung full of posters of our favorite band, the Stones, the Beatles and the Kinks etc. etc. Besides these marvellous posters we also had the place decorated with oil lamps and fishnets. Especially in wintertime when the oil lamps burned combined with the odour of the Aladdin-kerosene heater; the air-quality in the room resembled the smell of an airport hangar with its doors closed, while inside a 747 was roaring all its engines for a couple of hours.

I still love breathing in the air of burnt kerosene before I get ready to board a plane. I actually like to linger before stepping inside the carrier, to savor the moment, of taking a last good sniff of these intoxicating engine fumes at the airport.

Where I live now we only have the fresh smell of salty ocean-air to breathe, apparently this is much healthier. When I am in a nostalgic mood I turn on our oil lamps to bring back those happy memories, my dear wife starts fussing at me that the fumes of the lamps give her a headache and irritate her eyes and make them water.

In the olden days, during the recess, I used to love to stand outside right over the roster of the gas heating system of the school classrooms. There was a nice burning smell coming through these rosters and I sometimes would put my damp mittens on them and dry and warm them, while enjoying that damp burnt smell and at the same time being able to slowly warm up from the icy winter’s cold.

The smell of gasoline I still find totally irresistible even now. Are you aware of the fact that if your hands feel too hot to work with, pouring some gasoline over them cools them down wonderfully? Of course, be sure to stay away from an open flame however, for the so-called cooling effect, will go up in fiery inferno most definitely!

Charles and I were the proud owners in those days of a homemade stereo contraption; it was the most important piece of furniture in our room. All paid for by money we earned by delivering newspapers.

By “Radio Schuurman”, we bought the cheapest stereo record player available that this fellow had for sale.

We especially loved going to this flea market then and would buy all kinds of interesting stuff.

It had not been that long ago since the war was over and memorabilia that survived the battlefields, you could find to buy at this market in reasonable condition and at a good price. Military uniforms, helmets, medals, gas masks, bayonets, soldiers’ boots, you name it; they would sell it.

One of my favorites were the old fur coats ladies used to wear, those were really nice and warm in winter, especially on a motorbike! All used stuff, we did never mind who the old owner was nor his or her condition while using it.

So too, I once managed to buy a complete German uniform with medals and ribbons galore. Also for a bargain, I picked up an artificial leg with straps to connect to amputated limbs, made for a poor invalid soldier from World War II no doubt, I thought it might come in handy one day…

So, one morning I got the crazy notion to impersonate such an unfortunate Army veteran, and I dressed up in this dress-uniform with lotsa impressive medals and put on the wooden leg on as well and seated myself against the wall of the old City Hall downtown. I put a helmet, which didn’t really belong to my military German garb, in front of me and put some money in it. I realized a while back if you put paper money on display people would become even more generous and happily fork out more cash; so, I covered the bottom of the helmet with some old German money (no longer legal-tender), which I had picked up for near to nothing at the flea market.

Years ago, when I was forced to go to church by my parents, I had noticed that the church ushers would play this trick by putting paper money in the bottom of the collection bags to encourage the rest of the congregation to become extra generous.

To set the mood, I had also taken Teddy with me; our old trusted four-footed friend and he set himself solemnly next to the helmet with old German money. Teddy was a kind of a Chow Chow dog and had the gift of looking appropriate sad at some occasion. He was extremely well suited for the job, for besides being good at looking sad; he was able to take care of himself and in a pinch, could fight his own battle if needed. To really make this all picture perfect I had also taken my little harmonica and played the haunting World War II tune, popular on both fronts,” Lily Marlene” with abandonment over and over again.

To my big surprise my helmet was filling up rather quickly, perhaps partially due to Teddy’s sad-faced presence?

Then I was thinking the helmet probably contained enough ill begotten money by now and may be that it was high time to leave the area without trying to put too much attention to my by now miraculous recovery.

I tried carefully to loosen the prosthesis and wanted to make a Houdini like disappearance act from this “war-crime” scene of my own creation. Just when I thought I was ready to make my clean getaway, dear Teddy snatched up my wooden leg from the ground and started to run away with it playfully. He ran faster than a jackrabbit past the Old Canal and towards the old Movie Theatre “Camera”.

My traitorous furry 4-footed friend managed to pull this nasty trick on me, while I was putting my not so “hard earned” money safely away, which had been deposited by caring strangers into the old German helmet.

With only a slight twinge of conscience, I quickly put my tainted dough away, which was given to me by generous hard-working people. After all money was money, even ill begotten one. As far I was concerned it was mine now; so, I decided to start the fast chase after Teddy, to retrieve my prosthesis.

Understandably while I was seen running at great speed towards the Old Canal, I got some extremely dirty looks from people who had earlier generously coughed up their hard-earned dough to help a poor Army veteran in need. They were only too happy to help out a military hero of course, who appeared to be severely handicapped due to a cruel war. Rightly so, they would never have contributed cash this freely, to a miserable deceitful scallywag like myself!

When I managed to almost catch up with dear Teddy near the Broom Bridge he chose to run down the steps, while still holding on for dear life onto my wooden leg. Next, he started to run over the dock area and I continued to try catching up with him and just, when I got close enough to finally grab him, he managed to get away from me as the little bastard jumped into the canal with his prized possession still clenched between his massive canines. To make the situation even worse, he then quickly swam in triumph away with my prosthesis, resembling a Venetian speedboat out of an old 007 movie.

I in the meantime, I was able to run considerably faster without my wooden leg of course and managed to make it to the other side about the same time as my miserable four-footed mutt.

I ran quickly over the bridge to reach the other side, where I met him and had to save his neck for there was no way the stupid mutt could get out of the water as the side was too high a climb for him.

Trying to save him was a complicated procedure as I was getting soaking wet during the process and lost several of my hard-earned ribbons and medals in my saving attempt as well. Teddy in the meantime had let go of my prosthesis as he perhaps panicked when he was unable to get out of the water to scale the canal walls. So, at the end of this somewhat tricky operation to save my favorite mutt, I watched my wooden leg fast disappear floating away under the next bridge.

So, on the sound of “The Universal Soldier” which was played rather loudly in my then favorite Dutch pub “the Cavern” down at the old canal, I could see my wooden leg in all its former glory, bobbing up and down through the canal and then forever disappear from the horizon under the City Hall Bridge.

On the other side of the canal and safely out of the water, Teddy looked at me quite pleased with his self and then vigorously shook himself dry. Which resulted in Teddy becoming somewhat drier and definitely left me a whole lot wetter for sure. He looked at me with his head cocked to one side, like he was wondering or we might have some more adventures planned for the day, while his tail wagged a mile a minute.

Personally, all I could think of is change my soaking wet military uniform into some comfortable warm and dry civvies all the way down to my damp skivvies!

After all, said and done, I thought my so-called “military operation” was reasonably successful, when I think back at it now… 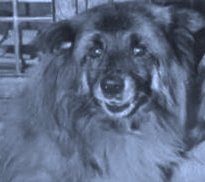